Home/Blog, Contests, Landscapes, On my travels, Portrait photography/Shoot the Face
Previous Next

All the planning in the world, does not necessarily mean you will create the perfect shot. Other factors weigh in on the final outcome also. Weather, cloud formations, wind etc are some things that are out of our control. But also just plain luck comes into play. When shooting on the beach, it could be a silhouette of a surfer that catches your eye. Or when shooting in a valley, it could be a hot air balloon that drifts majestically into shot turning a pretty image into a brilliant one. Or when shooting the rolling hills from a cliff top, at sunset, the sun decides to put on a spectacular display, sending the whole sky a fiery red. And the shot you originally planned to capture turns into something else altogether. Even though you may have planned your shoot to the letter, it still pays to have some semblance of spontaneity about you. Otherwise you may miss the perfect opportunities that present themselves. It is very rare that this sort of brilliant luck happens. So when it does you better be ready and waiting with your camera pointed in the right direction. 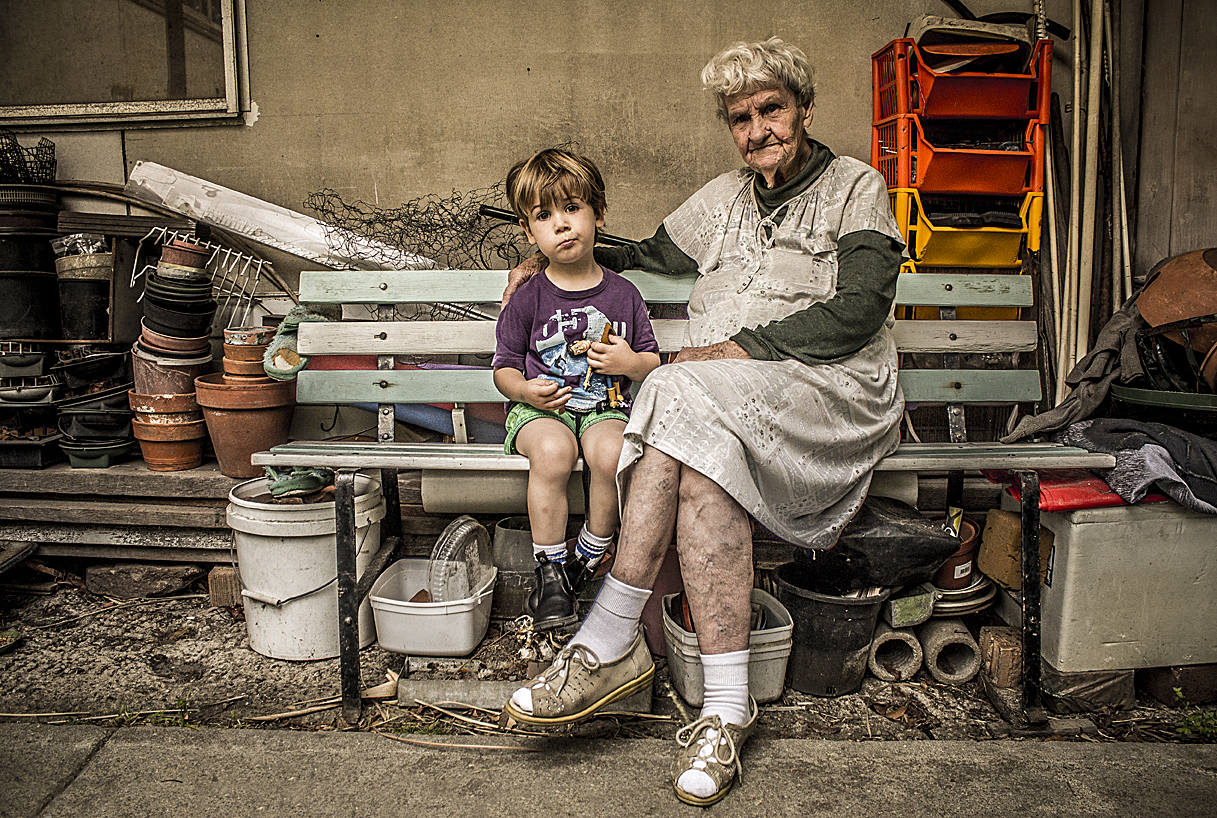 Recently I took this picture of my youngest son and my 92-year-old grandmother. It recently made the top ten portrait images in the “Shoot the Face” international portrait competition. On this particular day, this “luck” happened to fall my way. I had gone over to help my Nan get her weekly shopping and run a few errands and thought I would take her portrait while I was visiting. I wanted to capture some memories of her in her favourite place in the world. Her home, built by her husbands hands during World War II. My Gramps had passed away a few years earlier, and she often speaks to me of those times and how hard building materials were to come by, and how a family of four lived in the garage for years until the house was built.

I had my youngest son with me, as he is yet to start school. I planned on getting him to sit off to the side playing with his “Woody doll” whilst I had Nan pose. Not 1 minute had passed since I asked her to sit on this bench seat and smile for me, when she called Lucas over to sit with her. Silently cursing under my breath as I hadn’t yet taken a photo of her alone like I intended, I snapped a couple of shots of the two of them. I told them to look at me but not smile, as I wanted an edgier look to the photo.

Once I had humoured the two of them, I managed to distract Lucas long enough to move my grandmother around into different spots around her home and perform all the different lighting techniques I had planned for the day. Upon getting the images back to my house and flicking through them, one thing was totally clear. The shot of the two of them together was the hero shot of the day. I realised by looking at it, that it was all the little things that had fallen into place totally unplanned that make this shot the one that it is.

Firstly, the obvious. The fact that I never intended for Lucas to be in this shot at all, and my Nan had called him in anyway. Then there are the smaller details. Details such as, the contrast between old and young. Also the difference in their clothing. Hers being dull in colour and of an older more modest style, and his being more modern and vibrant in colour and the fact he happened to be wearing such stark colours that day. On closer inspection, the way in which he is clutching his toy to him and the look on his face he happens to be pulling, showing his young and playful nature as opposed to her wiser and more mature pose. The shot shows the relationship between child and Great Grandmother, that I hadn’t expected and even though I planned to sit her on this chair in front of the garage they spent so many years living in, I hadn’t planned on just how much of the shot is made by all her belongings from years past piled up behind them. In all that clutter a persons life is told. I can see leftover building supplies from the house my grandfather built with his blood, sweat and tears. Terracotta pots from my grandmothers years of gardening. old slippers, and containers that she stubbornly refuses to throw away for reasons that don’t make sense to me, but make perfect sense to her.